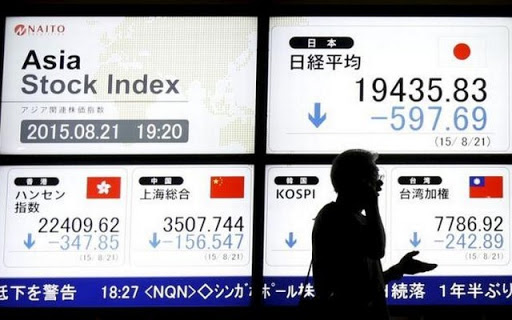 The safe-haven yen rallied and key government bonds were bought from the widespread unrest in the financial markets, set in motion nearly two weeks ago when China devalued its currency and generated fears about the state of its economy.

Fears of a China-led global economic slowdown drove Wall Street to its steepest one-day drop in nearly four years on Friday and left the Dow industrials more than 10 percent below a May record. A 0.6 percent fall in S&P 500 mini futures ESc1 suggested sentiment remained weak.

"China could be forced to devalue the yuan even more should its economy falter, and the equity markets are dealing with the prospect of a weaker yuan amplifying the negative impact from a sluggish Chinese economy," said Eiji Kinouchi, chief technical analyst at Daiwa Securities in Tokyo.

Focus once again fell on how Chinese share markets hold up later in the session.

While China gathered the spotlight, analysts pointed to other bearish fundamental factors at play.

"On the surface it would be easy to point the finger at slowing China growth, falling oil prices and emerging market currency wars as the reason why global equity markets have fallen sharply through the summer," wrote Sean Darby, chief global equity strategist at Jeffries.

"However, a mix of disinflation and deflation forces, a tightening in global monetary conditions and deteriorating profits in emerging markets are much greater factors."

Emerging market economies, many reliant on exporting raw materials, have been hit particularly hard by the spectre of slower Chinese growth and sliding commodities.

South Africa's rand ZAR= struggled at 14-year lows. The Turkish lira, its plight exacerbated by domestic political developments and a central bank suggesting it would take rate hike cues from the US Federal Reserve, languished near a record low.

Although its decline was not as grave, the dollar also suffered against key peers like the euro and yen as global growth worries undermined wagers that the Fed will raise rates in September.

The US currency came under additional pressure as Treasury yields extended their decline on safety buying amid the slide in equities. The benchmark 10-year Treasury note yield US10YT=RR was near a four-month low of 2.03 percent.

US crude oil CLc1 was down 1 percent at $40.06 a barrel after trading below $40 a barrel overnight for the first time since the 2009 financial crisis as signs of oversupply in the United States added to China concerns.